Botox can be injected into many of the muscle in the face. Here is a list of some of the more common sites:

The number one area Botox is injected is a complex of muscles known as the Glabella. These muscles are located between the eyebrows and their flexion leads to vertical wrinkles above the nose and/or horizontal lines on the bridge of the nose itself. We flex this muscle group to keep the sun out of our eyes or when concentrating, for instance when staring at a computer, but we also furrow our brow when we are angry or sad. For this reason, these lines are often associated with the negative emotions and patients often want them removed. To do so, we inject approximately twenty units of Botox into the muscle. This usually requires five needle insertion sites. The reason for the twenty units is because this is a thick, powerful muscle and most patients prefer this muscle to be more frozen. It is very rare someone complains of not being able to frown. They’re usually thrilled with a more dramatic decrease in motion. The reason for the five needle insertion sites is the muscle is wider than most people think, spanning from the center of the eye on one side to the center of the eye on the other, mid-pupillary line to mid-pupillary line. Once the muscle is weakened, the patient does not reinforce the wrinkles with repeated contraction and the existing wrinkles begin to fade. If the lines between the eyebrows or on the bridge of the nose are very deep, some patients benefit from dermal filler in addition to the Botox to hasten the softening process.

The second most common site of Botox injections is the lateral canthal rhytids, commonly referred to as the crow’s feet. These lines appear as a result of repeated smiling and squinting. Some carefully placed Botox can be the solution. We typically place approximately 10 units per side and the procedure typically requires 3-4 needle insertion sites per side. Botox can also be injected into a specific site within this muscle to raise the tail of the eyebrow and accentuate its arch. This is a very common procedure in women but can also be performed in men who feel their eyelids are beginning to droop. It is important that patients not lay down for approximately 3-4 hours after getting Botox injected into this muscle because of concern the Botox will migrate to other muscles and cause ptosis or drooping of the eyelid.

The third most common area Botox is injected is the Frontalis. Botox is injected into this muscle to address and soften the horizontal lines on the forehead. The Frontalis is a very broad but thin muscle. Flexion of this muscle raises the eyebrows. As a result, we typically like to minimize the amount of Botox injected into this site. Too much Botox in this muscle leads to a very obvious Botox appearance. The forehead becomes shiny and the eyebrows descend. Not a good look. So… Less is more. Despite the large surface area of the Frontalis muscle, we typically only inject approximately 12 units of Botox into it. This is often achieved via approximately 12 injection sites. A great deal of care must be taken to avoid too much Botox at certain parts of the muscle leading to ptosis or drooping of the eyebrows. Alternatively, too little Botox in the same areas will lead to peaked eyebrows and Jack Nicholson, Jokeresque appearance. This muscle can be tricky and we highly recommend you visit a doctor’s office that does a high volume of Botox injections, like Transform Me.

Botox has been safely injected into the upper face for over ten years. It gained FDA approval to decrease the appearance of frown lines in 2002 and the crows feet in 2014. The horizontal lines of the forehead will likely be next. But what other muscles can we target and what will it accomplish?

The Masseter- The Masseter is a muscle located at the angle of the jaw. It is the largest muscle of the face and is one of the muscles used in mastication (chewing). Botox is injected into this muscle in order to slim the jawline changing the appearance of the lower face from round or square to more of an upside down triangle. Botox paralyzes the muscle and with time the muscle atrophies or shrinks in size. Think of this as the opposite of working out. When you lift weights with your arms, your biceps and triceps grow and when you stop lifting for a couple of months your muscles return to their baseline size. Now imagine you break your arm and have to put it in a cast. A couple of months later, when the cast is taken off, you’ll likely notice the muscles of the affected arm are smaller than those of the arm you did not break. This phenomenon is known as ‘disuse atrophy’ and Botox placed in selected muscles, for instance, the Masseter, can have the same effect.

Mentalis- close your mouth and blow out inflating your cheeks. You may notice some dimpling of the chin. Some patients have these small dimples throughout their chin even when not making this face. They are the result of a muscle called the Mentalis and Botox can decrease their appearance.

Platysmal bands- the Platysma is a thin muscle that covers the front portion of the neck. Often times a segment of the muscle will enlarge and stick out creating a vertical band stretching from the chest or shoulder area to the jaw. Botox can be injected to soften these bands and return a smooth appearance to the front of the neck. 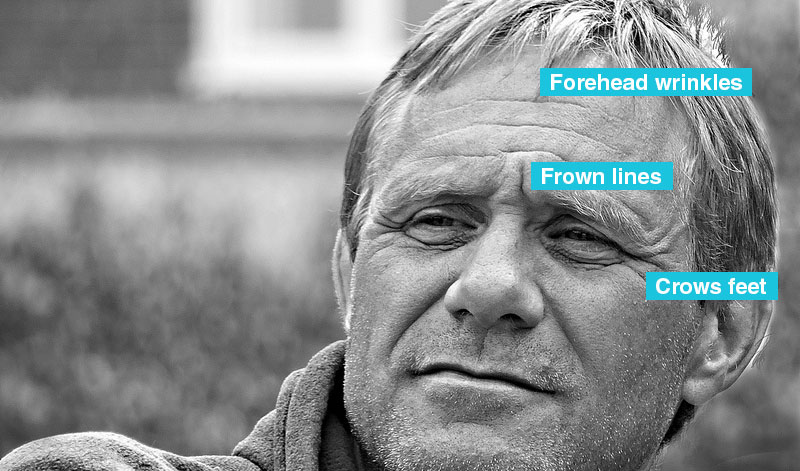